Why do businesses go bad?

Until recently, most business schools framed ethical lapses in business as the bad choices of individuals made through moral weakness. That is not entirely inaccurate, but organisational scholars at RSM say it is often beside the point, particularly when the rot runs deep in an enterprise or even an entire industry. 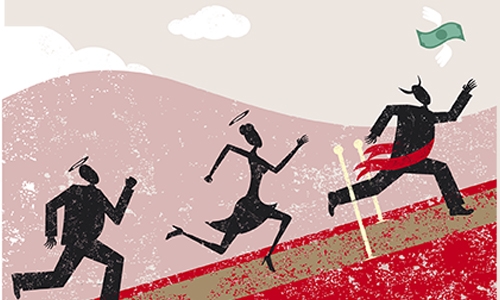 Researchers at the RSM’s Erasmus Centre of Behavioural Ethics are now developing a much deeper and more nuanced understanding of the cultural and behavioural dynamics that lead businesses and other organisations astray.

‘What we try to do, what a behavioural ethics researcher tries to do, is understand from a psychological point of view what motivates and enables people to do these bad things,’ explains Marius van Dijke, scientific director of the centre and professor of behavioural ethics at RSM.

Why we can’t say no

Prof. Van Dijke says that he, his colleagues at RSM, and behavioural ethics scholars at other institutions have found that very little bad behaviour is the result of conscious choice. Instead, a variety of psychological, interpersonal and economic factors lead people to do the wrong thing – often without even realising it. ‘The role of personality is limited in making people act in bad ways,’ he says.

But other people’s personalities can push individuals towards various kinds of actions. For instance, a supervisor plays an important role in giving people a sense of an organisation’s ethical boundaries. ‘That’s a very important person,’ Prof. Van Dijke says. ‘People, whether they like him or her or not, usually tend to look up to this person, and use this person as a way of inferring which type of behaviour is actually appropriate or inappropriate… If the supervisor does not condone unethical actions, you learn from that.’

Personality types also play a role in setting the ethical tone of an organisation. ‘People with neurotic tendencies tend to have some difficulty dealing with their own negative feelings and, as a result, they are a little bit hostile, a little bit anxious. Our own research shows that neuroticism predicts unethical behaviour of leaders,’ he adds.

Why? Prof. Van Dijke explains the neurotic boss’s insecurity sometimes leads to bullying of employees, which makes them fearful. ‘If you’re always a little bit on the lookout, that makes you focus on your self-interest and that in turn makes ethical transgressions seem less problematic,’ he says.

If you as the beaten-down employee have a neurotic side too, the damage can be even greater: Prof. Van Dijke’s team has found that neurotic leaders tend to be particularly abusive to neurotic subordinates, for reasons that are not yet well understood.

But whatever the boss’s psychological make-up, mistreatment by an organisation’s authorities is a strong predictor of bad behaviour. RSM researchers have found that people hate being treated in a disrespectful manner by their superiors. When it happens to an employee, a kind of inverse Golden Rule often seems to happen: doing wrong unto others as they have been done wrong by.

The general working environment may also encourage ethically compromised behaviour, according to Prof. Van Dijke. ‘When there really is an unethical culture, we feel licensed at least to also act unethically or even think it’s a proper way to behave, towards outsiders at least,’ he says.

Call of the group

At other times, Prof. Van Dijke notes, normally laudable feelings, such as loyalty, can be turned toward the bad. Dan Ariely, a professor of behavioural economics at the Massachusetts Institute of Technology in Cambridge, and co-founder of behavioural economics as a discipline, has demonstrated that if you see a person in a group you identify with act in an unethical way, you are more likely to excuse the action and even emulate it than if you see someone from outside your group do something that’s not quite right.

This kind of solidarity can be extremely powerful. For instance, prosecutors and investigative journalists who looked into the LIBOR interest-rate setting scandal in 2011 and 2012 discovered that as many as 20 of the world’s largest banks and financial institutions colluded in setting the London Interbank Offered Rate every day, possibly going as far back as 1991. This ethical breach made the banks billions of euros in excess profits and cost taxpayers, homeowners, students, consumers and businesses multi-billions of euros in extra interest.

However, cosiness isn’t the only harbinger of sin. Sharp-elbowed competition can also lead to ethical lapses. Recent research by Prof. Van Dijke and his team has found that the market environment also pushes organisational leaders to act in less moral ways. ‘The more competition in the market, the more unethical behaviour you observe,’ he says.

Prof. Van Dijke points to the 2012 News of the World telephone-hacking scandal as a good example of how competition can lead to ethical compromises. Desperate for scoops, journalists at the London tabloid had hired private investigators to dig up dirt on celebrities and other people in the news, paid British police officers for information and hacked into the voicemails of targets. The management of the newspaper denied that they were aware of or had allowed this widespread unethical behaviour.

Such instances might sound open and shut, but Prof. Van Dijke says that they are often surprisingly difficult for a participant to see. To paraphrase Linda Treviño, a leading behavioural ethicist, Prof. Van Dijke says: ‘Moral problems tend not to come with red flags attached to them.’

‘The problem is that if you are in this situation, you probably wouldn’t notice it,’ he says. ‘Most of what we do and most of our perceptions never reach our conscious awareness. That simply doesn’t happen. Most of our ethical behaviours or unethical behaviours are not driven by conscious processes, so you probably wouldn’t notice when your organisation is slipping.’

Two factors help create these blind spots, according to Prof. Van Dijke. First, when organisational leaders pay no attention to issues of morality, moral climates tend to decline gradually, making it easier for people to accustom themselves to new norms.

Second, issues that should be considered in an ethical light may be interpreted instead as an accounting or financial issue. Part of the problem, he notes, is that our whole biological make-up is simply not devised to recognise the complex issues that are related to ethics in modern society. For instance, we consider scientific frauds or accounting frauds as problematic, but our brains simply did not evolve to recognise these complex issues in which no specific victims suffer moral transgressions. Our brains evolved to recognise slapping somebody in the face or stealing their things as inherently immoral, not an act this abstract.

This is part of the reason that so many ethical dilemmas tend to crop up in the financial sector, in his view. ‘Nobody, including the insiders, properly understands the real complexities of what’s going on there. Because of these complexities, it is difficult to see what’s good or bad. That’s one major reason why so many of us easily do bad things – it’s because we have no idea that they are bad things,’ he explains.

For all these reasons the scientific director sees a lot of work ahead for the Erasmus Centre of Behavioural Ethics, particularly regarding the dynamics between organisational ethical behaviour and individual moral behaviour. ‘We have almost no idea of how these subtle processes actually work in organisations and what is really going on,’ Prof. Van Dijke says. ‘There’s much more work to be done.’

More information about the activities of the Erasmus Centre of behavioural Ethics can be found at: www.erim.eur.nl/behaviouralethics

Prof. Marius van Dijke can be contacted at: mvandijke@rsm.nl