Takeaway.com has won the Gouden Groeier Award, which singles it out as the fastest-growing company in the Netherlands. The award, an initiative of Erasmus Centre for Entrepreneurship and nlgroeit, was presented during the third edition of the BusinessBoost Live event at Rotterdam Ahoy. The winner was announced by State Secretary Mona Keijzer of the Ministry of Economic Affairs and Climate Policy. From late to 2016 to year-end 2019, Takeaway.com created a total of 4,703 new jobs (in FTE), making it the fastest-growing company in this period. This puts the online food delivery platform at the head of the Top 250 Scale-ups 2020. The 250 firms included in this ranking have achieved a joint growth of over 30,000 FTE. 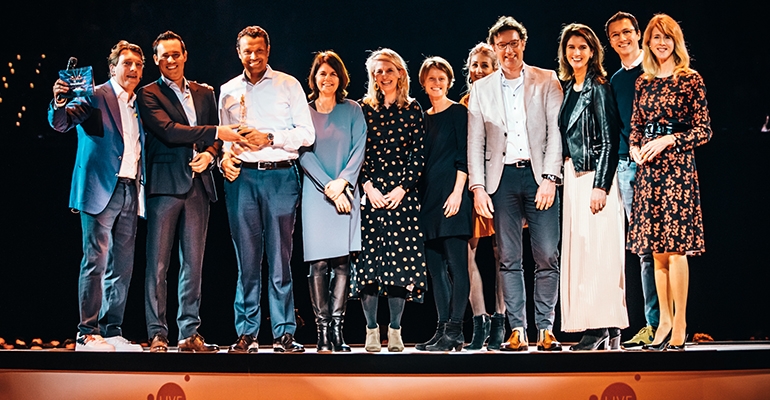 The presentation of the Gouden Groeier Award was part of a 2.5-hour event, during which a number of well-known entrepreneurs made an appearance on stage. For example, the evening’s programme included interviews and keynote addresses with and by the American bestseller author Verne Harnish, the coach of the Dutch national football team Ronald Koeman, fashion entrepreneur Nikkie Plessen and CEOs and company founders like Atilay Uslu of Corendon and Raymond Cloosterman of Rituals. Presenters Jeroen Pauw and Humberto Tan handled the interviews, while Coolblue CEO Pieter Zwart served as host for the evening.

When Jitse Groen started his website Thuisbezorgd.nl twenty years ago, the competition came from Amsterdam and Ede: two makeshift websites that referred customers to a handful of restaurants in the surrounding regions. These pages had been developed somewhere in an attic or small office by students and entrepreneurs who had asked themselves – as Groen had – why you still couldn’t order a pizza or Chinese takeout online. Just over a decade later, the Netherlands was already proving too small for Groen’s company. Thuisbezorgd.nl recently merged with Just Eat, and the newly-formed company instantly ranked as one of the largest online food delivery services worldwide. The fastest-growing young firm is Red Je Pakketje, which was established in 2016. Coming in fourth is Dept, which makes it the highest-ranking new arrival. Of the 250 companies on the list, 92 are based in Noord-Holland and 53 in Zuid-Holland. Noord-Brabant holds third place with 41 entries. This edition of the Top 250 Scale-ups features 156 new enterprises.

’It’s great to hear that Takeaway.com is once again the Netherlands’ fastest-growing company,’ says founder and CEO Jitse Groen. ‘We’re expanding quickly – both in the Netherlands and beyond. Our growth is creating a lot of new jobs. Both at our 27 offices in the Netherlands and abroad – but also locally at our 91 hubs, where we’re not only recruiting delivery personnel but also local management.’ To be included in the Top 250, companies needed to employ at least 10 FTE and/or turn over at least EUR 5 million at the beginning of the review period. In addition, they are required to achieve an average annual growth of at least 20% in FTEs and/or turnover in this review period, which runs from December 2016 to the end of December 2019. Making up the Top 10 are those firms that both created the most jobs in FTEs in the review period and recorded the strongest average growth per annum – once again in FTEs.

Through the Erasmus Centre for Entrepreneurship, Erasmus University Rotterdam has set up the largest academic research group in the field of entrepreneurship in Europe. Prof. Justin Jansen PhD, Professor of Corporate Entrepreneurship at Rotterdam School of Management, Erasmus University (RSM): ‘After spending the past few years researching and monitoring a number of fast-growing companies on the list, we are now also able for the first time to identify which factors have contributed to their rapid growth.’ Martin Luxemburg, Director of the Erasmus Centre for Entrepreneurship: ‘Working together with parties like nlgroeit, we try to share these insights within our programmes, in order to support other companies in their growth and their impact on the Dutch ecosystem.’ That is why the report, which can be downloaded from the website, not only lists the complete Top 250 but also describes a number of scientifically substantiated factors that influence companies’ growth. Nlgroeit, an initiative of the Ministry of Economic Affairs and Climate Policy, the Netherlands’ Chambers of Commerce, NLevator and NL2025, is a long-term programme that was set up to strengthen the growth potential of the Dutch SME sector. BusinessBoost Live is the Netherlands’ largest dedicated event for entrepreneurs and is intended to inspire entrepreneurs to keep moving forward. An ambition that the organiser Tribe Company wants to realise in partnership with the main sponsor ING and partners nlgroeit, BNR Nieuwsradio and Talpa Network.