When she was just 16, Roos de Wit-Goedhart began writing business plans. Although just a teenager, she knew, unreservedly, that one day she would establish her own business and so she set about finding mentors, reading books, studying and entering business plan competitions. But it was only in 2012, when she was pregnant with her third child, that she was struck by an idea that has turned into a thriving business – and so made good on that belief she had in herself all those years ago. Based in the Rotterdam chapter of entrepreneurial community Cambridge Innovation Centre, De Wit-Goedhart’s Study Tours designs, organises and delivers customised study and business tour programmes for groups of participants with an academic background, in Asia, Africa, North America, Latin America and Europe. Now nearly six years old, Study Tours is regarded as one of the leading study tour organisations in the world – and, with De Wit-Goedhart as its Founder and CEO, the company is set to continue to spread knowledge and educational excellence in the coming years. Here de Wit-Goedhart shares her insights on being an entrepreneur, an innovator and a lifelong learner, as well as a mother-of-three.

You have a long association with RSM. How important has this been in the journey to where you find yourself now?

I completed my MSc BA Business Society Management in 2003, worked for RSM from 2004 to 2013 and undertook my Executive MBA in 2008 and 2009 so, yes, the association has been long and of real importance to me. My most outstanding memory was the moment, during my two-year MBA, when I realised what a special environment I was in. I was suddenly struck by how many highly educated people I got to work and study with - and what a unique opportunity it was to have all that talent in one classroom. It was like being in a space with 90 different consultants and so I became like a sponge, absorbing as much as I could - and, in turn, giving back where I felt I could contribute. I relished the opportunity to be able to give and take experience and knowledge with others, in such a stimulating and positive environment.

What motivated you to undertake an MBA - and would you encourage other women to take it on?

The red line in my career is that I consistently try to push myself out of my comfort zone. When I took on the MBA, I already had a Masters in Business Administration, and people often asked if these two programmes were not the same thing. But they really are quite different. Through the MBA, I gained a better understanding of how to apply theories in practice. What’s more, as I got into higher managerial positions, I realised that there were many more strategic and political issues to be confronted, and the MBA gave me the skills to navigate through these. When I started Study Tours, having gone through the MBA process gave me the confidence and ability to oversee the business - and tackle every aspect of it with what I had learned in the classroom. A real and enduring highlight is the network that you gain. You make friends for life – and friends who have been in the same pressure cooker as you, working, studying and having families all at once. That creates a real bond. Even a decade after finishing my MBA, I know that I can call on my former classmates if I am confronted with a business challenge that I just can’t get my head around. It’s an amazing feeling to know that you have such a backup and so yes, I would encourage others to take it on.

You are a powerful role-model for the ability of women to work, study and have a family. What has enabled you to succeed at this?

Good time-management! I was pregnant with my first child during my MBA and the baby’s due date was exactly the same as the deadline for my in-company project. My supervisor’s baby had arrived four weeks early so she recommended that I hand in my project well ahead of time which I did. In the end, my first child arrived two weeks late, but I was thankful that I had managed my time well. I do think that women with big families are under so much pressure, it actually helps us focus in a funny way. I excel in times when there is a lot to be done because I focus on what is important, and not on the small things. Overall, I am very lucky to have a positive mindset and know my values – and I use these as guidance for every aspect of my life. I also regularly engage in the process of self-reflection. Whenever I confront something unpleasant, or when things are not working as they should, I step back and ask myself if I am doing the right things. From this, I have learned that sometimes you need to just do the opposite of what is obvious and then things start to flow again. Often, when I see my teammates trying to solve issues by working harder, faster and more efficiently, I say why not go to the gym or take a day off and then see how things work out. I often remind myself to live by rule number four of the MBA: don’t take life too seriously.

You’re a successful woman entrepreneur. What is the importance of ECWO’s focus on gender equality to you?

From my years working at RSM and my current role as an interim manager at Erasmus University, I have seen ECWO’s work up-close – and the faculty’s Executive Director, Prof Dianne Bevelander, is a longstanding role model of mine. I feel strongly that the research, teaching and sharing of knowledge that the faculty undertakes is highly important. It plays a role in getting the word out – and making gender equality everyone’s issue. Achieving gender equality is not just an issue for individuals like me or heads of businesses to confront. We are all in this together. We have created this world together and we must be able to tackle the challenges that face us together.

Speaking of challenges, did you face any when establishing Study Tours and what opportunities made a difference in getting your business up-and-running?

When I was pregnant with my third child in 2012, I knew it would be my last and that I would have four months at home to reflect and think about my future. I had been writing business plans since I was 16 because I had this very strong belief that I would one day establish my own business. With this driving me, over the years I had found mentors, read many books, studied and entered several business plan competitions but nothing had really taken hold. Then, during those months, I had the idea for Study Tours, wrote the business plan and, for the first time, felt like I was really on to something. My husband, Robert, encouraged me to put the plan in a drawer and just see how I felt after I returned to work at RSM. I thought that I would either be too busy to do anything with it, or that I would just forget about it. But, after two weeks, I took out the plan and showed it to Professor Bevelander and Professor Jaap Spronk and, to my surprise, they were both very encouraging. I had engaged in some negative self-talk before sharing it with them – thinking that they would advise me that starting a business and becoming an entrepreneur was maybe not a good idea for someone with three children and a mortgage. But their positive reaction ultimately led to the establishment of Study Tours. I knew it would be a hard sell in the beginning, with people wondering who I was and what I was up to. But I also knew that I had the knowledge, experience and network to give it a try. I never wanted to regret not taking on the challenge. It took a lot of courage to launch in April 2013, in the middle of the financial crisis with three children aged six months, one and two, but I did it.

You work with universities, business and individuals around the world through Study Tours. From this unique vantage point, what is it that connects us all?

We are all human We are not robots. No matter where you do business or where you are from, most people have a passion and most know their values - and if you get them talking about these things, which I always try and do, they get a twinkle in their eye. It’s a real common denominator.

What drives you to make Study Tours a success and what keeps you going?

I always like to quote Ralph Waldo Emerson: "Do not go where the path may lead, go instead where there is no path and leave a trail." If I look at both my personal life and career I can see that I like to build things. Whether it’s renovating a house with my husband or setting up new programmes in the working environment or growing Study Tours organically and at the pace that I have chosen, I like to build from the ground up and leave something behind. This takes creativity, innovation, and lifelong learning. That’s the trigger for me now. 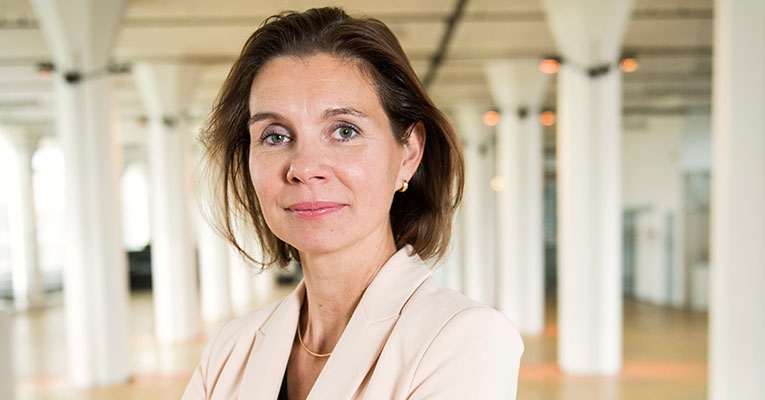