It is with deep regret that we have learned of the death of our former colleague, Emeritus Professor Jaap Spronk on Monday 8 February 2021, after a battle against cancer. 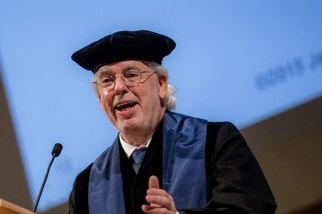 Until his retirement in 2015, Jaap Spronk was academic dean of MBA programmes until 2014, and full professor of financial management science at RSM. He joined us from Erasmus School of Economics, where he had been full professor of finance and investment since 1982. He will be remembered for always being a good-humoured and positive person who went out of his way to help people. He was appreciated by colleagues and students alike.

Jaap contributed greatly to the development of our School in his role of academic dean of the MBA programmes. He initiated several important programmes for RSM and Erasmus University Rotterdam, including an MSc and a one-year executive master’s degree in financial management. He had a true entrepreneurial spirit and built an impressive international network via his many travels. His charm, positive energy and warm personality will be missed by many friends and colleagues around the world.

He served as an editor or numerous journals, including managing editor of the Springer Series in Financial Modelling, and associate editor of Operations Research.

He was the founder and first chairman of the prestigious EURO Working Group on Financial Modelling, and was a member of the Royal Netherlands Academy of Arts and Sciences since 1988. His international awards include the Umbra Erasmi Medal of Erasmus University in 1996, Gold Medal of the University of Crete in Greece in 1996, Gold Medal of the International Society of Multiple Criteria Decision Making in 2002, and The President’s Award of the EURO Association in 2012.

Our thoughts are with his wife Yvonne, his children and grandchildren.

There is an opportunity for online condolences at https://vanderspekuitvaart.nl/memoria/; name Jaap, code KNTW037. The funeral will be held in line with Covid restrictions.

Dean Chair of Department of Finance