To address these questions, this article takes an explorative approach. From a literature review of African state governance and development aid approaches, we take colonial legacy as the most distinctive factor responsible for African administrative traditions. In addition, we define three ways in which foreign aid programs have dealt with African administration:

Using 34 African countries’ National Adaptation Programmes of Action(NAPAs), we analyze how African governments actually frame adaptation as a governance challenge. We contrast these frames with: (1) administrative traditions based on colonial legacy and (2) the ways in which development aid programs have historically dealt with recipient African administrations. Our findings indicate that NAPAs only meagerly refer to the administrative tradition that could be expected based on colonial legacy, but extensively refer to blueprint ideas common among international donors, or ignore administration altogether. We discuss the implications for adaptation to climate change. 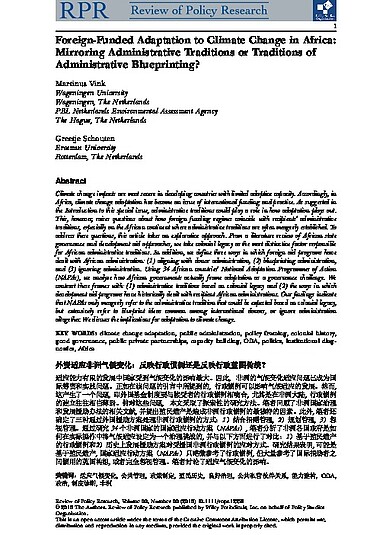