Are we too safe? Could we live better by living more dangerously?

Dr Neil Thin is a senior lecturer in the School of Social and Political Science at the University of Edinburgh, UK. He researches, teaches, and does public work on aspirational social planning for good lives and decent societies. As a visiting blogger for CESAM, he wonders if some of us are already living too safely and how that affects our happiness. 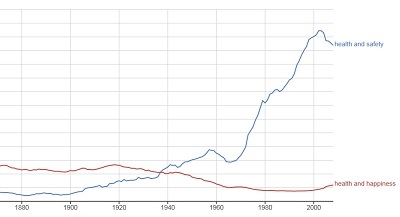 We now live in a uniquely safe, but also a uniquely safety-conscious era. But reduction of public fears hasn’t kept pace with increases in safety. In modern societies, people tend to be disproportionately scared of many things that are of minimal threat to them. Ironically, precautionary measures designed to make us safer also make us more vulnerable to fear. The resulting ‘therapy culture’ may well make us weaker in the long run.

But in any case, do all humans prefer safety? And if so, how much safety is good for us? Do helmets, seatbelts, and airport safety checks make us happier? Do post-accident inquests produce rational responses? Do they make us feel safer, and if so is that what we want and like? And if a safety device or precaution seems directly to make us safer, will that optimism still be valid if you consider indirect and longer-term effects, such as the risks of boredom or complacency, or the missed opportunities for learning from mistakes? Since it is unlikely that statistics and utilitarian calculus will ever answer these questions, we must largely fall back on everyday observations, qualitative enquiry, common sense, and reasonable debate.

Are accidents bad for happiness?

Ultimately, debates about safety ethics are about happiness. This requires us to assess carefully the trade-offs between security and other things that make people enjoy their lives and flourish. For example, plenty of people seem to like living dangerously . And accident victims often seem to not only bounce back, but even to experience post-traumatic growth . That is, they recognise the accident as an important turning point leading to an enriched or wiser life.

Still, surely no-one could seriously argue that to promote happiness we should make people’s lives more dangerous and embrace nasty surprises. People want the right amount of safety. But from a happiness perspective, how would we recognise optimal safety, and optimal pursuit of safety?

In a much-cited but seriously misunderstood and misrepresented 1970s study on accidents and happiness, people who had been permanently paralyzed by accidents were still well above the mid-point on self-rated life satisfaction. That’s what triggered the many citations, because people seemed surprised to learn how well accident victims recover mentally in spite of physical disablement.

And so a memorable but dangerously incorrect story line was often derived from that research: happiness survives even the most horrific accidents. What didn’t get mentioned so often was that the victims were significantly unhappier than before their accidents. Unsurprisingly, subsequent research on severe accidents has generally confirmed the commonsense expectation that accidents make survivors unhappy. No doubt further research will also confirm that the unhappiness of accident victims is socially contagious, spreading at least through close family and friends if not also through wider populations.

Beyond the nonsense of ‘total safety’

So if accidents are bad for the happiness of survivors as well as ending the happiness of fatalities, it seems logical to conclude that any well-run society will develop very strong systems for protection against accidents as well as for protection against disease. If you’ve not yet read the ‘Safety’ chapter in Pinker’s Enlightenment Now , have a flick through it – unless you live in Detroit or Damascus, it’ll make you feel wonderfully safe.

In the modern era, most measures of the success of health and safety show astonishing progress, including protection against many new threats such as modern diseases, and industrial and travel accidents. But have some societies reached optimal safety at least in some regards, and does pursuit of some kinds of safety increase other risks of harm?

Let’s be clear about one thing: ‘total safety’ is total nonsense. It is just as silly as the World Health Organization’s aspirational concept of health as ‘complete wellbeing’. Neither concept has any legitimate role in realistic planning. To flourish mentally and physically, humans need to experience some illness, some dangers, some accidents, and some suffering. Any perfectionist approach to either hygiene or safety is doomed to failure, is obviously unfeasible, and is therefore morally irresponsible.

We inhabit a world that is far happier and far safer than at any earlier period since humanity came into being. But lots of people are still unhappy, everyone suffers some avoidable injuries, and many fear huge future environmental catastrophes, nuclear war, and global epidemics. Are we approaching optimal safety, and even optimal happiness? As we get safer, do we get happier, or are there compromises to be made? Are some of us already, in some ways, living too safely? Have we bought our current safety and comfort at too high a price?

If you enjoyed reading this, try another one in our series of blog posts about aspects of safety from the Centre of Excellence in Public Safety Management (CESAM) at Rotterdam School of Management, Erasmus University (RSM). It is intended to act as an introduction to the Centre’s work; to promote and foster the professional development and management of public safety organisations, and to give CESAM members a platform to share their observations and experiences as academics and citizens. Please see our webpage to find out more.