Fewer fast-growing companies with at least one female entrepreneur

Although the number of fast-growing companies with at least one female entrepreneur has risen sharply since 2014, this number has fallen in 2018. This is one of the results in the ScaleUp Dashboard 2019, an annual research into fast-growing companies in the Netherlands, published by Erasmus Centre for Entrepreneurship (ECE) and Rotterdam School of Management, Erasmus University (RSM). 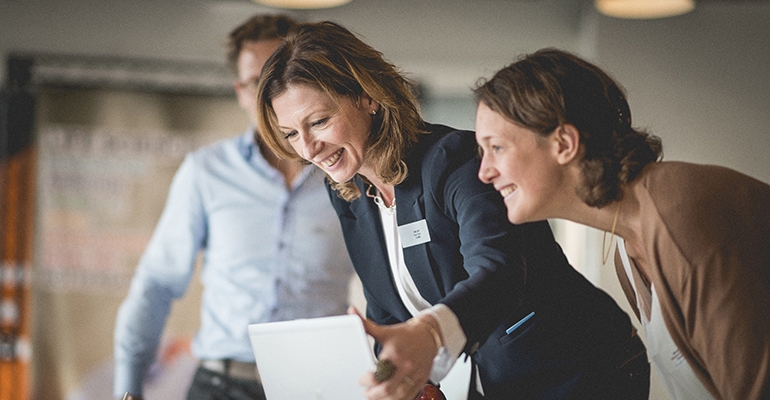 According to Dr Ingrid Verheul, associate professor of strategic entrepreneurship at RSM, this is partly due to differences in the growth ambitions of women and men. Earlier research showed that lower growth ambitions of women can be explained to a large extent by starting businesses in industries with lower growth margins and investing less time in their business than men, which limits their growth potential.

”Women identify less with the image of ‘a successful entrepreneur’ and value their entrepreneurial skills lower than those of men. Even if they are perfectly capable of running a successful young business, it is more likely for women that they do not want to grow or grow so fast because of their modesty and lack of business confidence,” says Dr Verheul.

Women are too modest

Social entrepreneur Nilab Yonousi is a role model and inspiration for thousands of young people, professionals and starting entrepreneurs. According to Yonousi, women are too modest to go outside and state their successes: "Dutch people – and especially women – often live by the motto 'Just act normal, then you're acting crazy enough!'. If you ask a woman in a top position what she has achieved, she often presents the successes as a team effort and answers in the we-form. For teams led by a man, that success is often attributed more to themselves.”

Despite the fact that the number of female entrepreneurs in fast-growing companies is stagnating, the number of young female entrepreneurs is increasing. Figures from the Dutch Chamber of Commerce show that there is a large increase in the number of start-up companies with a female owner between 13 and 18 years old. According to Dr Ingrid Verheul, this new generation of (young) women with entrepreneurial ambitions must be supported and motivated to develop their start-ups into successful upscaling companies. “One way to do this is to expose them to successful female role models: women who managed to build successful businesses.”

The Young Lady Business Academy is such an initiative. Elske Doets, Business Woman of the Year in the Netherlands in 2017, brings together young ladies with great ambitions in her programme where they are taught by various role models from business and politics. There they are trained in negotiation strategies, business and self-confidence. Especially in the self-confidence there is a lot of room for growth: ”Female entrepreneurs often have difficulty to see long-term perspectives for themselves. They naturally think of all the elements that could put a brake on their dreams, making them much more careful. This contrasts with men, who jump over the ditch without thinking of possible dangers. As an entrepreneur you have to dare to explore.”

According to Doets, the solution is not so much in specific government policy that stimulates female entrepreneurship, but it is a task of education to teach children – boys and girls – entrepreneurial skills from an early age. ”In America it is very common that you learn to outline your strengths and the direction you want to go without any reservations. In the Netherlands, especially as a woman, you are quickly put in place with the message to first get your diploma and then to continue dreaming. You may have the qualities, but then your ambitions will be put on hold.”

The importance of female role models

That successful female entrepreneurs are needed to give the new generation of female entrepreneurs the confidence to set up a successful business themselves, is also clear from recent research by RSM researcher and assistant professor Dr Laura Rosendahl Huber. In her study she shows that female students who work together with female entrepreneurs gain more self-confidence as an entrepreneur. This underlines the importance of female role models to visibly emerge. Yonousi: ”Women often do not realise how successful they are, both individually and in a team, and what impact it can have to share their story with others. This requires trust and courage. Daring to tell the real story, both the struggles and the successes. If you listen to someone like that, you think: she has achieved that, I can do that too.”

Research by Dr Pourya Darnihamedani of Utrecht University reveals another problem, namely that female entrepreneurs can benefit less from general incentives and more efficient regulations regarding entrepreneurship, because female entrepreneurs strive for less growth – partly due to their relatively limited access to financial capital.

This was reason for Simone Brummelhuis, founder of The Next Women and this year named the most influential woman in the Netherlands by Opzij, to set up investment fund Borski, which recently raised a first 21 million euros to invest in scale-ups with a woman at the top.

According to Brummelhuis, this prevents women from allowing their businesses to grow into scale-ups, which is one of the reasons that the number of scale-ups with a female entrepreneur is falling. “Venture capital investors are mostly men, who often tend to invest in like-minded people. And then there is also a large number of women who do not even turn to these parties, which means that women do not always receive the risk capital that they deserve.”

Brummelhuis emphasizes that this is not only harmful to the economy, but also socially undesirable: “Innovations must be encouraged by women and diverse teams with capital. With the Borski fund, which I set up with Laura Rooseboom from StartGreen Capital and to which ABN AMRO, ING Bank, Rabobank, Van Lanschot Bankiers and a large number of series entrepreneurs have committed themselves, the power of female entrepreneurs and teams with diversity are encouraged to help their companies grow.”