Experts investigate how collaboration can help refugees and Europe

How can organisations collaborate to optimise the effect and success of their efforts when dealing with asylum seekers? Experts from various sectors – practitioners, emergency relief aid and researchers – shared their experiences, lessons learned and objectives for future collaboration at a conference organised by the Centre of Excellence in Public Safety Management (CESAM) at Rotterdam School of Management, Erasmus University on 28 March 2019. It was held on Vessel 11 in Rotterdam’s city centre. 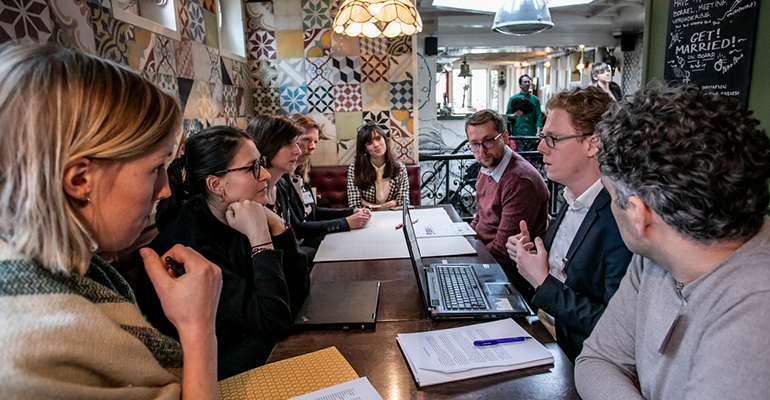 With several thousand asylum seekers arriving each day, the summer of 2015 saw the peak of a refugee crisis on Lesbos, Greece. Now, almost four years later, there are still one to two hundred people arriving at its coast every day. Some have to wait there for up to nine months for their asylum case to be reviewed. The conference, which was supported by the LDE Centre for Safety and Security, Erasmus Initiative ‘Dynamics of Inclusive Prosperity’, and RSM’s Partnerships Resource Centre (PrC), discussed how organisations and governments can work together to turn this into a more positive experience and find benefits for Europe.

Keynote speaker Marios Andriotis Konstantios, international relations advisor to the mayor of Lesbos, relayed that it was a humanitarian crisis that called for European involvement. While several municipalities initially signed an agreement and offered to take in refugees, many of these efforts were never realised. Konstantios said the recent political climate in many parts of Europe further complicated the crisis, resulting in an increasingly hostile environment to refugees. Konstantios left his speech open-ended, to remind the audience that millions of people have risked their lives or even died to seek refuge from war, violence and poverty in hopes of a better life.

Complimenting Konstantios’ speech, the mayor of Dutch town Krimpen aan den IJssel, Martijn Vroom, outlined a more micro-level experience. Krimpen volunteered for long-term housing of 100 Syrian refugees in 2015. From this perspective, care is assessed on a more individual level. The focus here lay on what the Dutch society could provide for each person to make their arrival and their wait on their case less daunting. This includes volunteers teaching the asylum seekers Dutch, reading to young children, and providing basic necessities.

A moral dilemma: What is fair?

Dr Conrad Heilmann, philosopher of economics at Erasmus University Rotterdam, presented the ethical dilemma of a humanitarian crisis, drawing on philosophical theories. In particular, Peter Singer’s effective altruism which has its roots in different migration crisis was alluded to, which states that people try to live up to what they can do in the most effective way. In other words: whether something is right or wrong to do has nothing to do with distance, there is a duty to assist, a duty to rescue.

The difference between an emergency relatively close to us rather than far away is practical, not moral. Dr Heilmann pointed to Konstantios’ mention – “his strongest moral claim” – of the fact that Greece was left alone to deal with the crisis as being unfair. This brings up the question of fairness, which Dr Heilmann elucidated with two key principles; one that it is simply equal treatment of equals and another that we should treat people in proportion to what we deserve, to our capacity, to our needs.

In applying this to dealing with the refugees entering EU Dr Heilmann explained “in taking the proportionality principle, the capacity to be provided by European countries then ought to be determined partly by GDP and partly by population size.” A question from the audience perhaps stated the obvious: “What can we say to what extent that the other European states have neglected their duty to assist in the refugee crisis?” In answering this, it would bring about the question of the imbalance among European states to assist, Dr Heilmann said.

Also among the presentations were founders of two organisations contributing aid in a novel way. One was ShowerPower, an NGO that provides showers and a moment of solace for women and children in refugee camps. Pieter Wittenberg, founder of ShowerPower, recounted his efforts in the camp of Moria, welcoming close to 9,000 people in its first year of existence.

Diederick van der Wijk, co-founder of Refugees Forward, shared the objective that fostering economic independence and inspiring innovation can do a great deal for the integration of newcomers in the Netherlands. By drawing on the capabilities of experienced entrepreneurs students, and corporates, Refugees Forward aims to develop tailored programmes that facilitate newcomers in achieving economic empowerment. In 2018, Refugees Forward has launched 12 businesses, received over €300,000 in investments, and created a community of over 100 active members.

In the afternoon, conference attendees broke out into six groups, each to discuss the crisis and its complexity from different perspectives. Both controversial and insightful statements and learning outcomes were the result of the discussions. Some of these included the root causes of migration, and in a larger context incorporating history into the refugee discourse.

Abstract themes also surfaced, including who has power and what this means, either by organisations in the field of work or by individuals conducting research, and what this means for who benefits in the end. There was agreement among several attendees and speakers that the narrative needs to be changed and that in European states we might turn the question around to ask what refugees might be able to do for us instead of seeing it solely as a crisis. In order to bring out the human element in the situation, a powerful narrative ought to be created, without the notion of fear taking center stage.

A voice through art

One of the groups discussed the refugee crisis in visuals, with owner of gallery De Aanschouw, Frank Taal and artist Pascal Bastiaenen. Much can be told in an image, and Bastiaenen’s works of art incorporates confronting truths in them. Much of western media has glorified refugees, and some have accused refugees as being fortune seekers or runaways. Bastiaenen’s art calls out these narratives by showing the harsh reality that refugees face and that their journeys are horrifying, that they are survivors. They also allude to the underground money flows that take place at the cost of refugees’ lives. This reiterated the need to combat organised criminal smuggling networks that are in operation, endangering refugee crossings more than already is the case.

Opening up a dialogue

The conference came to a close with many agreeing there is a lot that can be done in light of refugee arrivals and the way they can be perceived. Some of the ways to do this are to make the narrative more attractive, to not only draw attention through sympathy but by seeing refugees as having great potential to a society.

In addition, by reducing the distance that exists between those that can offer help and those that need it, the help could be made more immediate and accessible. Evidently, there are many ways in which improvements can be made to shift towards a better understanding, a change in mentality, and in turn taking responsibility.

This conference has opened up a dialogue, to create better understanding among practitioners and researchers alike, to really learn from each other. Ultimately, in Prof. Gabriele Jacobs’ words, “we need to utilise these different ways – such as artists and the media – to get messages across.”

RSM’s Centre of Excellence in Public Safety Management (CESAM) aims to promote and foster the professional development and management of public safety organisations on an international level. Its mission is to blend academic excellence with practical relevance, and provide a hub for academics, practitioners, trainers, consultants and policy makers for innovative, multidisciplinary research in the field of public safety. CESAM offers and promotes professional training and management on public safety on a European level and allow co-creation by connecting groups and stakeholders that are usually unconnected.