Clean renewable energy for greenhouses wins I WILL Award 2020

It was the innovative start-up that recycles heat from data centres that most impressed the jury in the I WILL Award 2020 on 7 July 2020. Jeroen Burks of Blockheating was presented with the €15,000 grand prize at the conclusion to the event that was livestreamed from the Erasmus Pavilion on campus by Rotterdam School of Management, Erasmus University (RSM). Blockheating’s project that exchanges the heat from data processing centres into greenhouses was one of the six finalists who pitched their start-up businesses to a live jury. Other competing innovative and impactful business ideas included upcycling fashion waste, and colourful covers for medical equipment that help bring a smile to children in hospital. Online viewers could vote for the business that they thought deserved to win an additional €2,000 audience prize. 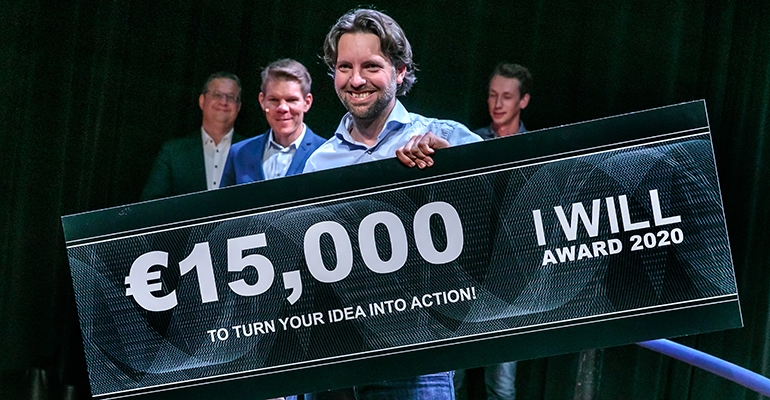 RSM’s mission ‘to be a force for positive change in the world’ is what the six finalists had to prove in timed short bursts of competitive pitches. The latest edition of the I WILL Award culminated in the I WILL Get In The Ring competition in front of a jury, and the grand prize of €15,000 would enable any of the competing start-ups to take their businesses to the next level.

This year, half of the finalists’ projects aimed to improve the lives of people in medical care; the three others were about helping the environment and creating a circular economy. Moderator Victor Vlam acted as referee and timekeeper as competitors went head-to-head in the boxing-ring-style event.

The 2020 event is the fifth I WILL Award, held every two years. This year there were a record 100+ applications, which were narrowed down to a shortlist of six by the jury of five – all entrepreneurs, business professionals and experts in their own fields.

Despite the absence of an audience in the Pavilion auditorium, the event was an exciting – and nerve-racking – challenge for competitors, who took on their opponents in the boxing ring to answer questions in a series of rounds in which the stakes got higher and higher.

There were three bouts in Round One. The contestants were paired against each other as they first faced four quickfire questions each from the jury and had only 30 seconds to give a complete answer. Then the duellists asked pointed questions of each other, aiming to find weaknesses in each other’s business models, and answered more jury questions. One finalist from each duelling pair went through to the final round to further convince the jury in just 60 seconds.

Ding! Ding! The boxing ring bell sounded the start of Round One for the pairs of duellists.

Razrez wants to change the way fashion industry works by upcycling fashion waste and bringing together high-end retailers, fashion schools, local designers, and recycling factories with its global platform. It enables fashion waste to be made available for recycling. To prove the point, Gorshkova was wearing a stylish jacket created from a Nike advertisement banner.

Urban Peels aims to put design into waste and pollution and create a circular economy. Groenwoud–van Vliet said that almost all food waste comes from cities and less than two per cent of it goes into products for consumption. Urban Peels was founded to rethink conserving and consuming food by making use of discarded food peels, mainly from oranges. In future, “Children will not throw away their peels, farmers will have a higher yield, and cities will deal with less wastage,” said Groenwoud – van Vliet.

Urban Peels won the first bout in Round One.

Two medical virtual reality platform start-ups – SyncVR Medical and Digniful – battled it out in the second bout of Round One.

SyncVR’s hardware and software gives people in outpatient care a VR platform that helps them reduce their levels of pain and anxiety. It’s backed up by round-the-clock support from hospital staff. Founder, Robbert Brouwer, explained that VR technology is still in its infancy but COVID-19 and social distancing measures have increased the need for digitalisation and e-healthcare. His personal goal is to inspire others in entrepreneurship in healthcare that can truly change society.

Digniful wants to help people who have suffered a traumatic brain injury (TBI) to lead a dignified life and re-integrate into a work environment. It aims to make an online assessment programme available. Eksteen de Waal told the jury that Digniful’s online platform can help people with TBI to make the simple choices that they struggle with every day. He pointed out that current TBI assessments are made in person and the start-up wants to make them assessable “no matter where [patients] are in the world.”

SyncVR won its bout in Round One.

The third bout of Round One saw founders of Fuusje and Blockheating in a face-off.

Edward Hoogendoorn of Fuusje had a moving personal backstory. When his late mother was being treated for cancer, he would cover the medical equipment by her bed with pillow cases. Later, he started investing in products to do this. When she died, “I vowed to continue to smile” said Hoogendoorn, and the idea of Fuusje was born. His idea of positive change is simple and innovative -- the start-up provides single easy-to-use covers that hide scary-looking intravenous infusion bags for children in hospital. On the back of each cover, there is a story which helps provide personal conversations between medical professionals and children.

Jeroen Burks said that he and the team at Blockheating are working towards a more sustainable food chain. He said he experienced the cliché of being a father and wanting to do something about climate change for his children. “Blockheating can recycle all the lost heat emitted by data centres and save on CO2 emissions”. Founded two years ago, Blockheating wants to use heat from data centres to power commercial greenhouses. After two successful pilot projects, the start-up is looking forward to a full commercial pilot project, which will take another year to launch. It aims to physically place data centres next to commercial greenhouses.

Blockheating won its bout in Round One.

With Blockheating, Urban Peels, and SyncVR Medical winning their place in the final round, the three start-ups had a minute each to give a convincing speech to earn the grand prize.

Urban Peels’ co-founder Lija Groenwould-van Vliet said that first batch of 200 ‘spice pencils’ were sold within a month of launch. “The award will give us legitimacy and money, and we will upcycle waste from our orange juice.”

Robbert Brouwer from SyncVR said: “I am proud that we are making an impact with SyncVR. We have trained hundreds of hospital staff and helped thousands of people in healthcare.”

Blockchain’s Jeroen Burks said: “In the Netherlands, we have three and half thousand greenhouses. Our goal is to make a sustainable food chain and green IT centres.”

While the jury was deliberating, Thom Uildriks, founder of Boxrs4all and a winner of the 2018 I WILL Award, spoke of his start-up’s achievements. The company donates a pair of boxer shorts in Tanzania for each set of underwear sold in the Netherlands. So far, the company has donated 6,000 pairs and has created 600 hours of labour in the African nation. He assured competitors that people will listen “if you tell a good story and tell it with confidence”. Uildriks is applying his entrepreneurial talents to another business Moja which donates underwear or sanitary pads to girls in Tanzania. He aims to donate and sell one million products by the end of 2025.

And the winner is …

Before the winner of the main €15,000 prize was announced, the audience prize of €2,000 was presented to Fuusje. Founder Edward Hoogendoorn thanked everyone and emphasised how he “will make it [his promises] happen.”

Professor Ansgar Richter, Dean of RSM and spokesman for the jury, addressed all the finalists, saying: “It was a difficult decision for us because of all the wonderful ideas. There are really six winners tonight but the true winner is the world. You have made a huge impact on the world already.”

Prof. Richter announced Blockheating had won, and handed over the huge presentation cheque. He asked Jeroen Burks for his immediate thoughts. Burks quipped: “Who are we going to hire tomorrow?” to laughter.

Burks went on to explain: “I want to comment on entrepreneurship at RSM. I was taught a lot and every now and then I get to recall and think, we had that lesson in class, but there was one that I missed, the difference between corporates and start-ups.” He explained that while corporates can perhaps lose revenue for a quarter, but a bad quarter means the end of business for start-ups. “In that sense this money means keeping this business alive. So, thanks for that,” concluded Burks.